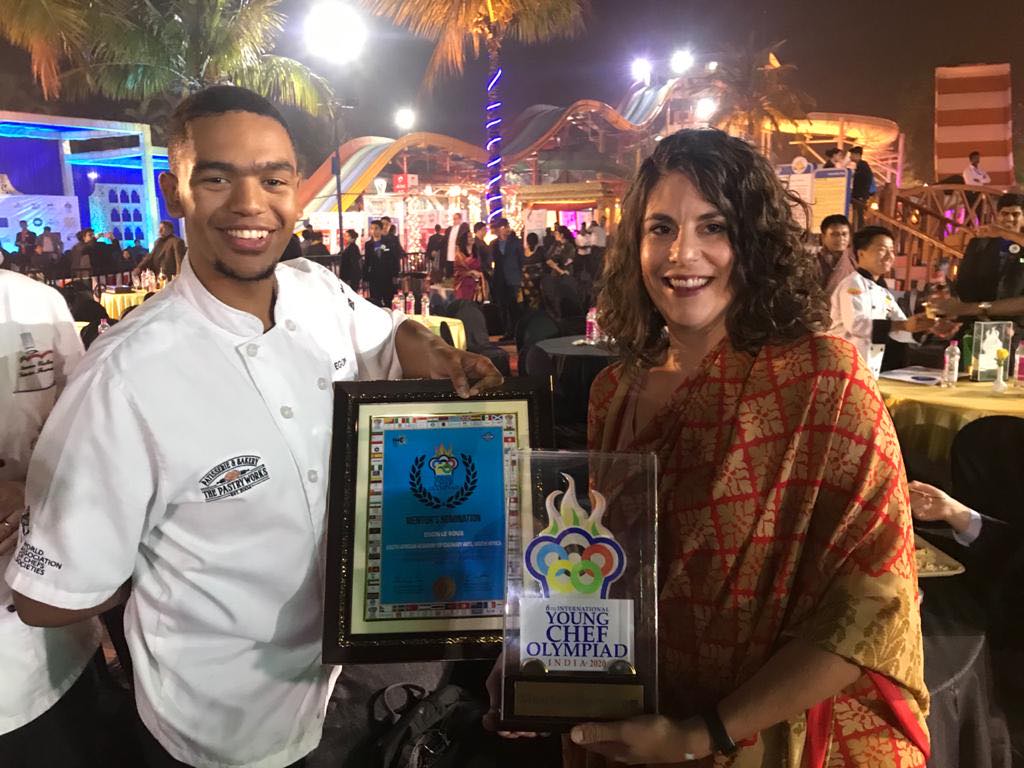 More than 60 young chefs from over 60 countries competed at the Young Chefs Olympiad in India between the 28th of January and the 2nd of February.  Only one representative per country is chosen to attend and this year Egon Le Roux, a talented chef on the rise, was chosen to represent South Africa.  This is considered the pinnacle of competitions for young chefs.

He considers food an art form, which spans borders and cultures, a way to unite people.

This incredible 19-year-old started his journey with food at a young age, from watching the food network to cooking for his family.  The joy he saw in people’s faces upon tasting his food spurred this young man to pour everything he could into becoming a renowned chef.  Egon soon realised that food was so much more than what we sustain ourselves with.  He considers food an art form, which spans borders and cultures, a way to unite people.

Egon is from humble beginnings.  Living in a community that faces numerous social and economic challenges.  He credits his parents and family for instilling a strong work ethic in him.  Along with his love of food is his love of sport.  In his time at Alexander Road High School, from which he matriculated in 2018, he played first team rugby, received academic colours, and was his class representative.  “My love for sport and cooking kept me away from what goes on in the community on a daily basis.  Thanks to this I was protected from falling victim to my surroundings.  Now I am privileged to make my dream become a reality.”

In 2019 he took the next steps in fulfilling his goal of becoming a chef by attending the South African Academy of Culinary Arts.  His talents were quickly recognised and he completed his internship at the 6th best restaurant in the country – La Petite Colombe in Franschoek.

Competition was fierce and he was up against young chefs from culinary focused countries.

His trip to India to represent SA was his first out of country.  Arriving in India was somewhat of a culture shock, the sheer number of people he saw and the traffic from the airport to his hotel was immense.  Egon was overwhelmed by the warm welcome he received.  Before the competition got underway, he was able to visit the traditional market in Kolkata where local produce, spices, and grains take centre stage.  The street food culture, and their approach to the culinary arts in India, was a fascinating experience.  “I enjoyed all the different Paneer curries and different types of flatbreads.  Eating mostly vegetarian obviously takes getting used to for us South Africans!”

Once the Olympiad was underway Egon knew he would need to bring his best.  Competition was fierce and he was up against young chefs from culinary focused countries, that attend top universities that have sixteen kitchens, that have three years of culinary study under their belts and who have competed in multiple international competitions.  Was he nervous?  Of course!  But in his own words, once he walked into the kitchen he felt at home and enjoyed the cooking immensely.  Despite the pressure, the scrutiny by cameras, the judges that were heralded chefs that had themselves won many prestige awards – Egon excelled.  We are so proud to announce he qualified in the top ten and received a mentor’s nominee award.  Truly a humble young man, when asked about this he said no one was more surprised than himself.

Egon is a role model for all young South Africans.

Even more valuable than these amazing accolades, Egon said, was the privilege of meeting the other contestants and mentors and sharing in a diverse food culture.  “The way that connections, bonds, and friendships where formed from day one was remarkable and proof of how food connects us all and really is a universal language.  Even though we competed against each other, the camaraderie was incredible and I know I have made friends and connections for life.”

Egon is a role model for all young South Africans.  His advice to those looking at a culinary career is to be sure you have a love for cooking as this will be necessary to survive the stressful and tough environment that can exist in a professional kitchen.  He believes it is passion that will carry you through the tough times.  He cautions that in order to ensure a solid foundation you need to select a culinary school where you are mentored by your lecturers.  Opportunities will arise through your associations and reputation.  “I feel really blessed to be able to study at SAACA, which is a smaller private culinary academy where we get personal attention every day.  I think as a chef it is also very important to be open minded and to have a spirit of always wanting to learn and improve yourself and your craft.”

Although we are not able to taste the delicious food he prepared during his time at the Olympiad, Egon has been kind enough to share his own family’s recipe for Koe’sisters.  So, after a final massive congratulations to the chef himself, I’m off to try my hand at making one of South Africa’s favourite comfort foods.  Luckily, if my version is not very good, I know with chefs on the rise such as Egon, all we need to do in order to taste world class cuisine is step out the front door.

1. Sift cake flour into a large mixing bowl
2. Add the salt, sugar, spices and mix
3. Add the cooked and mashed potato and butter
4. Work into the flour mixture until it resembles crumbs
5. Mix in the yeast
6. Add enough lukewarm water to form a medium dough
7. Knead until a smooth and elastic dough is obtained
8. Cover and leave to double in bulk
9. Prepare the cinnamon syrup and boil for 5-10 minutes until slightly thickened. Remove from heat
10. Turn dough onto a lightly floured surface
11. Using a rolling pin, roll to 3cm and slice into logs of approximately 3cm wide.
12. Cut into 4cm rectangles, gently shape to an oval and fry in hot oil until golden brown
13. Once all the koeksisters have been fried, soak them in the boiling hot syrup for 2-3 minutes and then roll in desiccated coconut 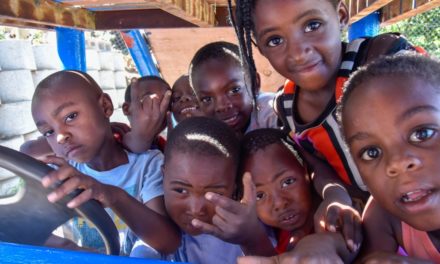 From Trash to Table: The New Sustainable Food Movement 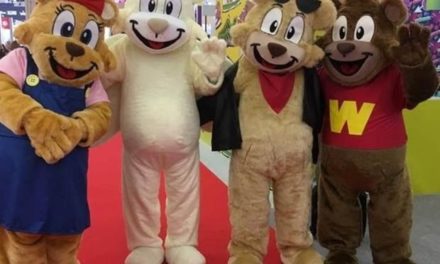 BEarKind Campaign on the Move to Stop Bullying

GROW GIRLS TO TAKE UP SPACE